“How To Be A Film Composer” Part IV: The Biggest Myths of Becoming a Composer 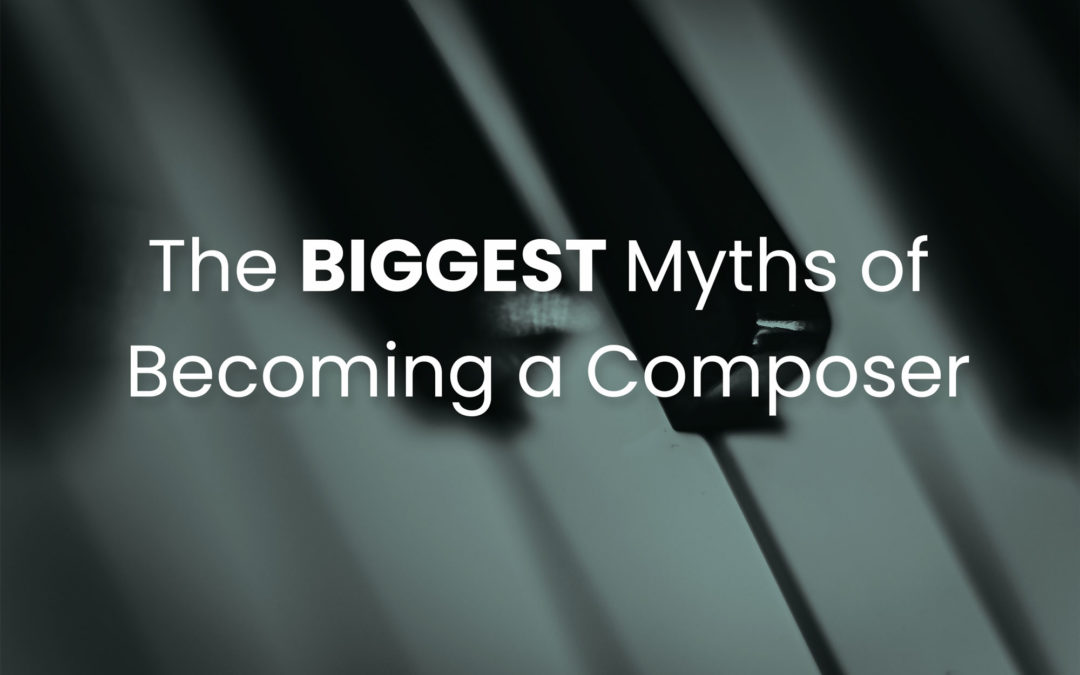 In Part 4 of our “How to be a Film Composer” series, we’ll debunk some common myths about becoming an aspiring composer when you first get started in the industry.

Myth #1: “I need to read and write sheet music”

One of the biggest myths out there that stops many talented musicians from pursuing film composition as a career is that they think reading and writing sheet music, or writing scores with pen and paper is the only way to effectively communicate with other musicians and complete a true film score.

While a knowledge of orchestration techniques and basic music theory is necessary to being a composer, reading and writing sheet music is not a hardened requirement. Many composers have full music theory knowledge, conduct their own orchestras, and write primarily on piano with pen and paper. Many more composers write primarily with a MIDI keyboard, analog synths, and a DAW while sitting in the mixing booth during recording sessions. Nowadays, composers come in many shapes and sizes, just like the films themselves. Imagine for a moment if all film composers wrote in a neo-classical or baroque style…

+“How to be a Film Composer” Part II: The Tools of a Composer

Film scoring as an industry needs composers who aren’t skilled in those areas, but are able to take a simple idea, bend and twist that idea to create something unique but also fitting of the narrative. This is the major difference between Hans Zimmer and John Williams. Completely different approaches to writing, but both are equally iconic in the film music world – which should give musicians of all types something to celebrate.

Myth #2: “I need to conduct my scores while recording”

This has a similar message to myth #1, in that composers of both approaches are able to thrive. Whether your preference is to conduct your own orchestras, or if you’d rather listen closely to the recording from the mixing booth is entirely up to the composer. John Williams will go up to the podium and address the orchestra by section, giving instructions to improve the playing of everyone, and making changes on the fly to best fit the scene or cue.

Hans Zimmer will sit back in the mixing room to give a little more focus to the recording itself. He will also go out in between takes and talk to specific players or sections just like John, but he lets someone who has conducting skills take control of that part of the creation process. Conducting is an optional skill depending on your priorities as a composer.

One who prefers to get the orchestral players playing exacting how they should emotionally and rhythmically would most likely want to learn conducting. One who prefers a particular sound to the mix and recording style would most likely be okay to hangout at the mixing desk during the recording sessions, while continuing to be vocal with the orchestra to ensure the best performances.

Either way, learning how to interact with orchestral players, along with writing music with orchestration in mind is essential to getting great performances out of all the musicians involved.

One debate I always had while in college was, should I spend my free time developing my composition skills on my own, which may take longer, but also saves me from having even more student debt? OR, do I try to get into a music college, which may expedite the process but also could be tough for someone not as good in a formal education setting? The few music theory classes I took at my community college taught me nothing, except for daily anxiety that I may have to play piano from sheet music.

Through numerous film composing forums, videos, masterclasses and blogs, (like this one) I learned that a self-taught approach is not only accepted, but in many cases preferred. All humans are different when it comes to learning styles, but all of us want to save some money. So if your brain has the capacity to learn music theory, try learning on your own at first. If you indeed have the money AND prefer a more structured curriculum, then perhaps formal music education is the best thing for you.

The key is to look INWARD and figure out which learning method works best for you specifically. Don’t worry about composers who graduated from Berklee, Juilliard, or other music schools. There are just as many who are completely self-taught, so take the path that fits your personality and/or financial situation.

One suggestion for those who are self-taught is to make sure to one day get a composer mentor or become an assistant for a bigger composer in order to understand how the industry works and also learn as much musically as you can.

Myth #4: “My music must stand out instead of tell a story”

The last major myth is that your music must overtly stand out within the film in order for it to be considered effective. Let me explain…

Over the last several decades, the trend in film scoring has been gradually moving towards a simple approach to the orchestration – with an added emphasis on sound design experimentation. Big orchestras are somewhat a thing of the past, as many composers have taken the approach of less instruments, but taking liberties to add a new spin to what those few instruments can do in terms of playing style or adjustments to the sound.

As an example, let’s look at how the soundtrack for the famous Superman film franchise has changed over time. If you watch some of the behind the scenes clips of Hans Zimmer composing ‘Man of Steel (2013)’, it’s evident that he takes a more simple but “unique” and experimental approach to scoring the Zack Snyder directed film.

On the other hand, John Williams wrote music that has much more of a big orchestra fanfare for the 1978 ‘Superman‘ film that matches the sound of the original 1940’s Superman cartoon. The theme style really changed during the latter comparison, but listening to the 1940 and 1978 versions, you could possibly switch them out and many listeners wouldn’t know that there was a 40 year gap between them.

That musical gap is VERY obvious between the 1978 and 2013 Superman themes. This proves that Superman was basically the same character for 80+ years, but the 2013 theme matches the darker, more realistic version of Superman presented by director Zack Snyder.

This illustrates that as composers, our jobs are to write music that matches the story, mood, character and world of the film; not write the next memorable theme that will rocket us into stardom. Very few composers will have the opportunity to have that type of theme notoriety that John Williams had from 1975-1993. The filmmaking style today compared to back then is so different that if you tried to write in that style, you’d be tossed in the bin with all the other John Williams (classic era) soundalikes. Plus, going back to our director-composer discussion, John had Steven Spielberg directing the films he had to write to – which specifically called for a score that brought wonder, emotion, and memorability.

+How to Be a Film Composer” Part III: The Director and Composer Relationship

To sum up, go for the really fancy layup, not the ¾ court shot. If you’re in doubt about whether or not your music works in a film, make 100% sure that your composition fits within the framework of the story, world and pacing.